Microsoft releasing SQL Server 2012 gave database developers a number of new functions. This article describes two of them - LAG and LEAD window functions. The first one returns value from one of previous rows, the second one a value from one of following rows.
Before LAG and LEAD functions, comparing values from different rows were not so easy. It required using self joins and subqueries or common table expressions to be easier to understand. Now, it can be done in an elegant way - with LAG or LEAD function.

All queries in this article are based on test data created and described in the previous one - Window aggregate functions in SQL 2012. If you are looking for a script to create this table structure and insert test data, please check there. For simplicity, below I present only brief information about it.

There are two table as shown on the diagram:

There are 3 sprinters in runners table:

First two participated in 10 races. The results are stored in raceResults table:

Have you ever dreamed about having a possibility to combine in one row a value of the current row and a value from the previous one? If so, with SQL Server 2012 that dream becomes true!

LAG provides a way to use a value from any of previous rows based on a specified order.

There is no reason to wait any longer. Let's take a look how it works in practice.

I want to display the current result (race X) and the previous one (race X-1) for each runner. As each runner has to be considered separately, I need to use an optional statement - PARTITION BY. 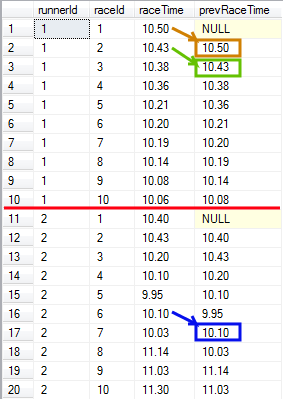 SQL Server virtually creates 2 separate lists (partitions) - one for each runner (partition by runnerId). Each list is sorted by raceId (order by raceId). LAG(raceTime) returns the previous value to the current row value on the list. It is pretty obvious but it is also worth to notice - first rows on each partition are NULLs because the previous value does not exist for the first row.

If there is a need to reference a value from two rows back, it is also easily possible with LAG function. Although, LAG requires only one argument, there is also a second one that is optional. It is an offset parameter that instructs SQL Server how many rows it should look back for the queried value. A default is 1. It means LAG(value) = LAG(value, 1). 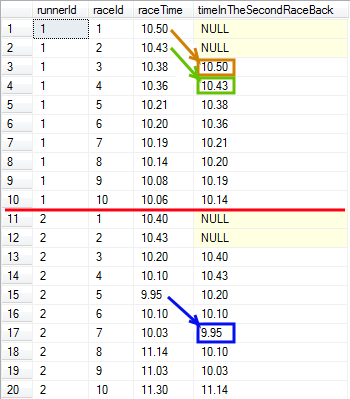 Referencing two rows back, results in two NULL values for each partition because 2 rows back do not exist for a first and a second row.

Those NULL values returned for first rows are not always wanted. If they are not, they can be defaulted to any other value. The below query uses 99.99 as a default. A default value can be provided as a third parameter to the LAG function. 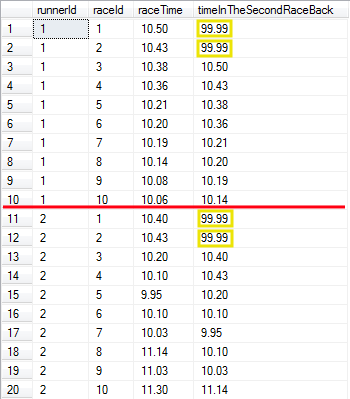 The LEAD function is very similar to the LAG function. A difference is LAG looks back for values and LEAD looks forward. Similarly to LAG, LEAD requires:

It may take 2 other optional parameters: offset and default.

A sample query that returns for each race a current race result and a result two races back is presented below. 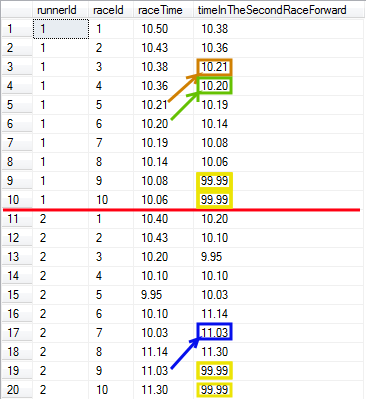 Because of PARTITION BY clause existence, each runner is considered separately in context of the LEAD function. LEAD value on third row comes from fifth row. Default value was also used to replace last NULLs (marked in yellow).

Generally saying, the LEAD function works in analogical way as the LAG function.

LAG and LEAD functions are useful also because they can be put into expressions to calculate difference between values from two consecutive rows. As LAG/LEAD returns a scalar value, depending on data type, it can be concatenated, multiplied, divided, added, deducted, compared etc. Take a look at the example below. It uses a previous value to check whether a runner was faster or slower this time. 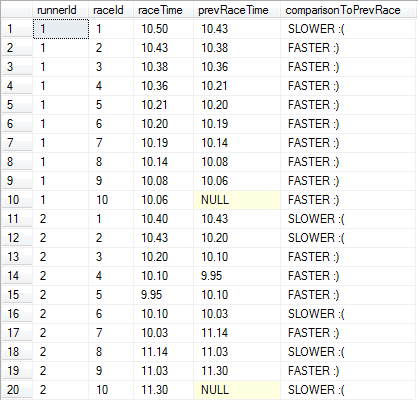 A value from a previous row is compared to a current row (raceTime < lag(raceTime)) and a proper text is return based on the result.

Moreover, one value can be a result of an expression containing both LAG and LEAD function.

LAG and LEAD are window functions which means they should be used with OVER keyword. Additionally, it requires ORDER BY clause in the OVER section to specify order of rows. Without the order, previous row or following row phrase would not make much sense. Theory about LAG function can be found on MSDN pages - LAG (Transact-SQL). LEAD is described on LEAD (Transact-SQL).

Before LAG and LEAD functions, comparing values from different rows were not so easy. It required using self joins and subqueries or common table expressions to be easier to understand. Now, it can be done in an elegant way - with LAG or LEAD function.