GitLab CI/CD is a strong competition to other Continuous Integration tools like Jenkins or TeamCity. Besides using GitLab for managing your repository and GitLab CI/CD for running automated tests, you can do deployment to AWS EBS with GitLab as well.

Before I show you how to configure GitLab to deploy your application to AWS Elastic Beanstalk, you should have your Git repository already in GitLab. If your source code is not there yet, you can create New project with the green button in the top right corner of the page and import an existing repository to GitLab.

I also assume you have an account on Amazon Web Services, an environment in Elastic Beanstalk and an up and running application there. You should make it working manually first before you start automating it.

At this point you should have a web application on AWS Elastic Beanstalk and you can manually deploy a new version anytime. If that is untrue, learn how to do it and practice it.

To do a manual deployment you probably log into AWS Console with a username, password and MFA code (I hope). That will not work for GitLab CI/CD so for example you have to create an access key that will be used by automatic deployment.

Add the access key to Variables in CI/CD section in GitLab to make it accessible for Continuous Integration scripts. Choose Settings -> CI/CD on the left menu. Then click Expand in the Variables section.

Add two separate variables for the access key and the secret access key. Both are values generated by AWS in the IAM section. Remember to choose Masked option which will enable special treatment of these values. Without it those values might appear in GitLab logs which is obviously a security violation. The secret access key must be strongly protected as it allows accessing your AWS environment.
Then click Save variables.

Build tasks in GitLab CI/CD are defined through .gitlab-ci.yml file on the root level of the repository. Here is a sample content of the file that has two stages and two tasks: build and deploy.

The first stage - build consists of build task which simply runs gradle tasks that builds the web application and creates WAR file. This task exposes the created WAR file so it is copied over to the other task - deploy. Thanks to that, deploy task can use mySampleApp.war.

The second stage - deploy consists of deploy task which is very different to the first one because it uses python image not JDK. It is done that way to take advantage of a possibility to install awscli which is needed to do the deployment to AWS. The body of the task includes a series of command line operations. Let's go through it one by one:

That is pretty it. After these steps, a new application version is deployed to AWS Elastic Beanstalk. 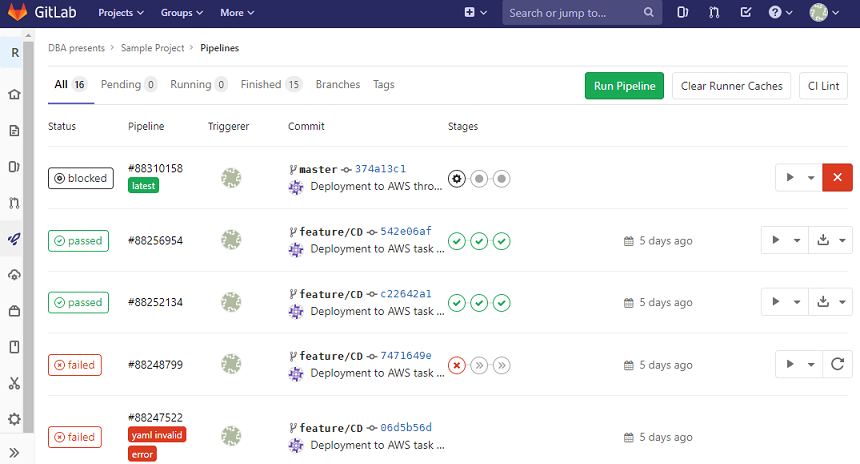 It is worth to mention that the build-deploy process (a pipeline) is triggered by each commit to the repository. There are more options available. For example you can make the pipeline manual so it does not automatically starts with a commit. If you want to do that or anything else, check GitLab CI/CD documentation.