Window functions are not new in SQL Server but SQL 2012 shed a new light on them. In the past, they were mostly used for ranking rows with RANK, DENSE_RANK, NTILE and ROW_NUMBER functions (Ranking Functions (Transact-SQL)). Aggregations could also be used in SQL Server 2008 but aggregates were calculated only for whole partitions. It was a nice feature which simplified some queries. Next big step was made in SQL Server 2012 which made them more powerful by supporting frame clauses. Besides splitting data to partitions, a developer can define a frame which moves a row by row. Then, data in the frame can be aggregated.

In this article I will present examples of using window aggregate functions in SQL Server 2012.

For demonstration purposes I created the following structure.

The following script creates the tables and inserts test data:

The schema represents result of sprint races (100 meters running races). There are 3 sprinters in runners table:

First two participated in 10 races. The results are stored in raceResults table:

I will use this data for demonstrating usage of window aggregate functions.

They are aggregate functions like AVG, SUM, COUNT but defined on a frame of rows using OVER keyword. The rows are grouped using PARTITION BY and sorted using ORDER BY clause. The frame of rows is defined once for the whole function but the particular set of rows is chosen to the frame separately for each row. As a result, for each row the window aggregate function is calculated and each row has separate result of the function.

The frames can be defined in a few different ways. I describe them below.

Frame is common for all rows

The simplest case is when the frame is the same for all rows in the query. To make it more practical, lets take a look at the following case based on runners and raceResults tables.

Problem - I need to display all Tom's races with time and overall Tom's best time for comparison.

It can be achieved by this query:

Below is the result of execution. 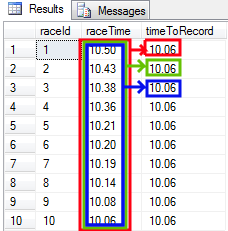 Three colors show source of data for calculation of the first three timeToRecord values. The first value marked in red was calculated based on all ten rows from raceTime column - a minimum of the values was found in this case. The second value marked in green is the same because it was calculated on the same values - all ten raceTime values were searched for the lowest number. The third timeToRecord value is no different, because like the previous two values, it was calculated using the whole set of values.

In this case the frame is constant and the same for all rows - red, green, blue and others.

Now, when the simplest case is left behind, the query can get a little more complex.

Problem - You may want to calculate best times separately for all runners.

Separate frames will be needed for different runners. In our case - two, but actually we don't care about the exact number as a definition of the frames are the same. SQL Server takes care of using proper number of frames. Frames duplication can be done by PARTITION BY keyword:

Result is as below: 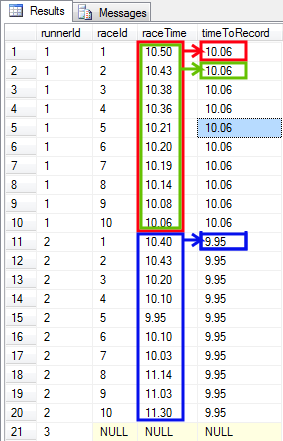 As you can see above, there are two frames (red/green and blue). One for each distinct runnerId. It was defined by PARTITION BY r.runnerId clause. It is worth to notice, the frames do not move. All timeToRecord values for one runner are the same.

True power of SQL Server 2012 in area of window aggregate functions comes from frames that can change. In this section I will show how frames can expand.

To achieve this I need to go further with narrowing a range of rows included in the calculation. When I calculate the required value for raceId=3, I should find the best time of the runner from races 1, 2 and 3. RaceId=4, 5, 6 ... have not taken place yet so I should not include them. This "narrowing" can be done by using BETWEEN ... AND ... clause in the OVER section.

You can see below that a size of the frame depends on the raceId for which min(raceTime) is calculated. 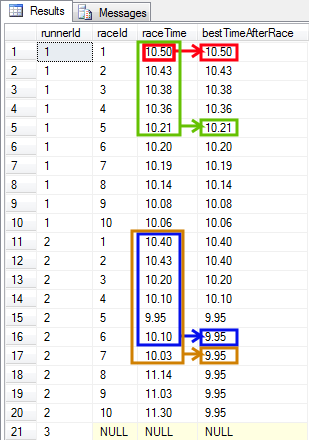 Problem - I want to present the best time of last 3 races. I want the result to be presented for each race. Each runner should be considered separately.

The query solving the problem is very similar to the previous one. I need to modify only the part which is responsible for defining the beginning of the frame - UNBOUNDED PRECEDING needs to be changed to 2 PRECEDING. 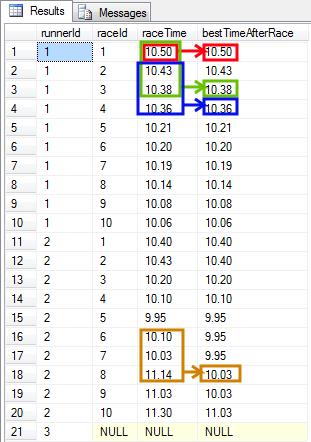 In this example the frames are not longer than 3 rows because they look at 2 PRECEDING rows and the CURRENT ROW. If enough preceding rows are not available (for the first and the second row), then only available rows are brought for calculation and the frame is shorter. I think about such construct as of fixed-length frames that are stepping along with the rows for which the calculation is being made.

Of course, the queries presented above are just examples. Their purpose was to show different ways of using window aggregate functions. Please take a look at more examples below: